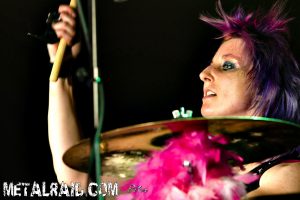 Violet the Cannibal is probably one of the hardest working female drummers in the UK. She has worked with many bands including top tribute bands supporting major acts touring throughout Europe, UK, US and South America, including many major Festivals. Initially taught by Dave Mackingtosh from Dragonforce. She has also worked with legendary Punk band Vice Squad. Violet also toured for two years solid with American guitar legend Adam Bomb, wowing audiences with fireworks and flames. No one plays as many shows clocking up over 250 a year. She is also the first female drummer to be featured on two tracks for the Xbox game, Rock Band.
Xbox Links : Sisters – http://youtu.be/5orI91Hv9IU
Say Sayonara – http://youtu.be/wfHG9CyqTWk

She is a drummer with extensive musical experience playing in bands for over 10 years, initially. Playing all styles but with preference for rock/pop/punk. A wealth of experience playing live and studio work to a click. She has played on tracks that have been aired worldwide on radio and television.